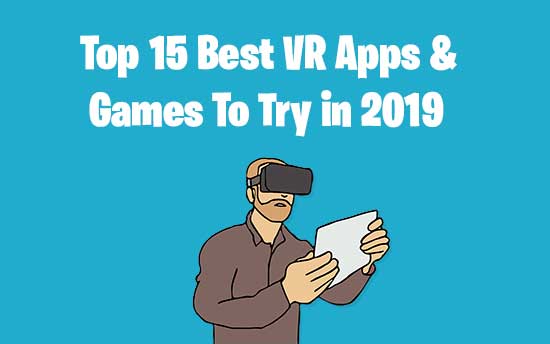 Virtual Reality or VR is a latest form of entertainment. Anyone who is having VR Gear Set can avail the breathtaking adventure of playing games, watching thrilling videos, and using fun apps virtually. In present times, games that make use of virtual reality immensely popular throughout peoples who love high-quality graphics and animations.

The virtual reality is an application that creats 3D artificial environment to video games and applications. VR is applied to the games to give you a real enjoyment. Without VR, such a unique gaming experience is not possible through any other medium.

There are number apps that are available for VR to effect, but we are here listing the top 15 best VR apps that entertain you in all the possible ways. 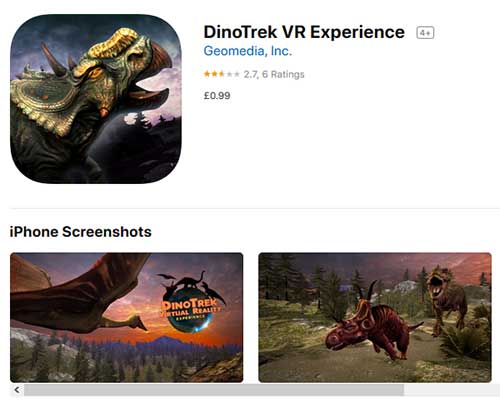 DinoTrek VR app is designed for iOS users to make you feel the life with dinosaurs. This app is designed for VR headsets of mobiles, particularly for Google Cardboard. DinoTrek allows you a visual field of 360-degree that tracks your head movement in VR plane. Use of headphones will give Best reality experience. This application can be used on iphone 6 or 6+. This VR app can be experienced on big screens, and even headphones are also not required. The next generation is updated with twilight and midnight versions.

VR mojo is a special edition for mojo.insights. This hand-free VR app designed and works for Google cardboard and VR viewers of other Android smartphones. You can control by just looking at orb to travel in it and if you continue looking at it and you will go inside! You can travel the whole world, get married, fell the magic of the King Arthurs Glastonbury tor; you can experience the illuminations on Hong Kong Harbour and many more breathtaking treats. It is one of the big VR app, but you will get a lighter version of it on demand. 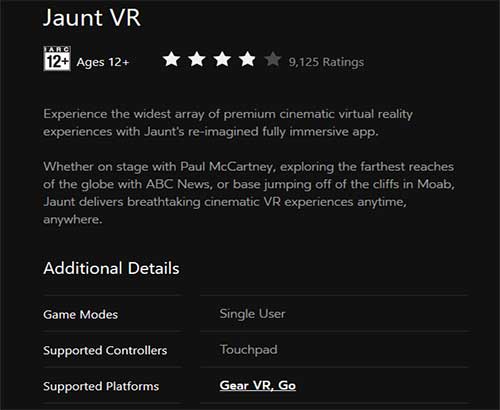 Jaunt VR is the best virtual reality app that does not needs headphones. You can enjoy over 150 premium, virtual reality experiences with its download. This app provides you with the unparalleled command to premium experiences that is impossible in other ways. Jaunt is the chief developer of mesmerizing cinematic experiences. This app contains 360-degree stereoscopic imagery with directional audio. All the contents in this app are not for every type of audiences because there is gore and violence depicted with the use of strong language.

Google cardboard help you to experience virtual reality on your android phone. This VR app helps you to establish your favorite VR experience. You can enjoy it fully on cardboard viewer. Using this game while driving may distract you from actual world situations. An updated version of this app may give you a taste of what all things can be done in VR with the new Arctic Journey demo. 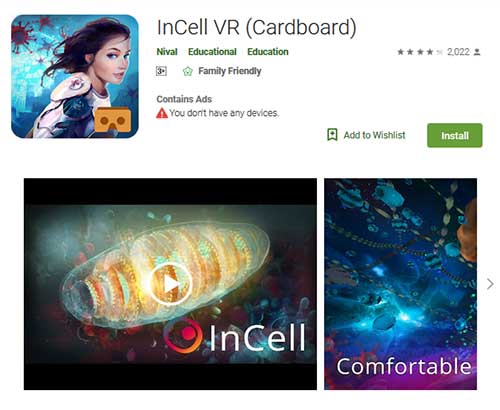 If you love to play an action and racing games, then InCell will be the best choice for you. This game comes with a bit of strategy and science thrown into the wonderful micro world of the carefully recreated human cell. You can play this game without cardboard or other sets even though this game is focused on VR.

War of Words is the battle that has been prepared by Britain’s greatest war poet. This game takes you back to the 1916 era by using virtual reality and also in mentality seized by Siegfried Sassoon in his disputed poetry “The Kiss”. This poem was written just before the war of somme; on the other hand, Sassoon was the training course of the army.

Price of War of Words VR:- 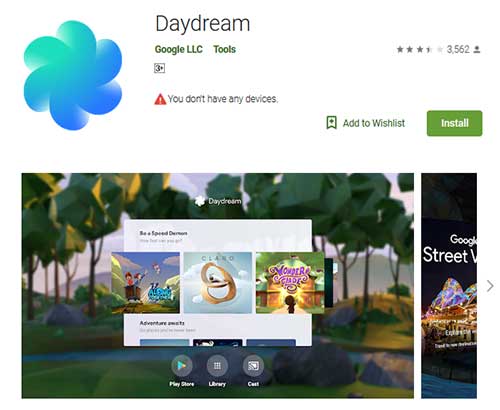 Google daydream is one of the best daydream apps, and it is the official VR platform from Google as well. This is the first best app to download for Google daydream headset. This is the app for daydream ready phone that brings the super quality of virtual reality. By using this app, you can establish your choice of VR and Browse from a fresh list of apps and games.

The open ocean is scary but a fantastic place as well and in this app, you will experience the depth of the ocean. Ocean Rift is known as world’s earliest VR marine safari park. In this app, you can explore the underwater world including sharks, dolphins, whales, sea snakes, turtle, and other sea creatures. You can even sit aside and see the sharks going nearby to you. Ocean Rift is one of the best gear VR apps as it helps to make this truly unforgettable memory. 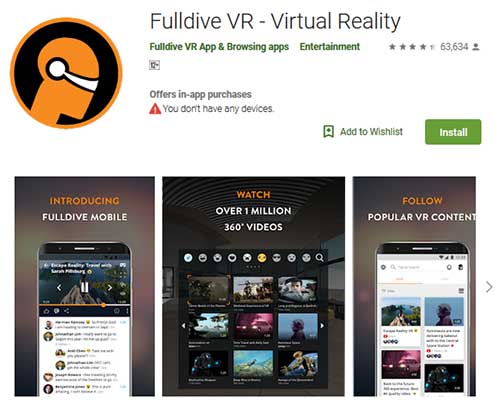 Full dive VR is the best VR apps for android & also the social all in one virtual reality platform. Full drive allows you to stream Youtube Videos and 3D videos in VR. Full Dive VR is fully user-generated virtual reality content and navigation platform. You can stream 360 Youtube videos in VR. This app allows you to browse anything in VR; you can even take pictures in VR and store and access your videos in VR. You can play all your videos like in a movies theatre. You can enjoy movies, video games and videos of your choice in 3D.

For Android (Varies with devices)

Free with some in-app purchases.

Littlestar is included in the list of top VR apps because this app allows you to watch content on Hulu, Youtube, and Netflix by using your VR headset. This app gives you the feeling like you have owned your IMAX theatre and you can visit it anytime you want. This app presents you the 360 degree designed videos. Littlestar gives you the best VR experience that includes Broadway theatre content, content for children’s and sports content. 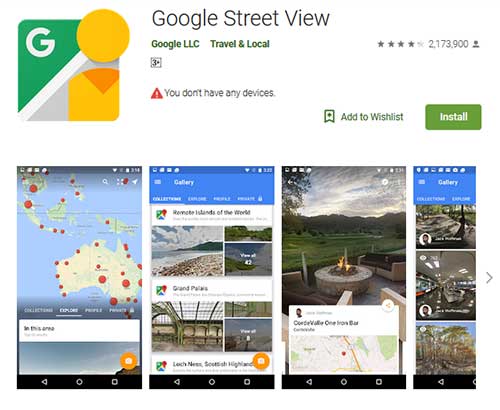 Google Street View is the best VR apps that allow you to travel around world landmarks, step into arenas, restaurant, museums and you can even discover natural wonders along with small businesses with Google Street view. You can add your own street view experience by creating photo spheres.

For Android (Varies with Devices)

VR cities are the app that welcomes you to travel into beautiful cities of the universe in mesmerizing VR. You can experience real cities like Paris or Venice as you feel you are there in real situations. This best VR app provide you with the addition of new towns on regular cities so feel free to come back. You can use Zeiss VR one, Google Cardboard or any other VR headset and can begin the journey of world exploration. 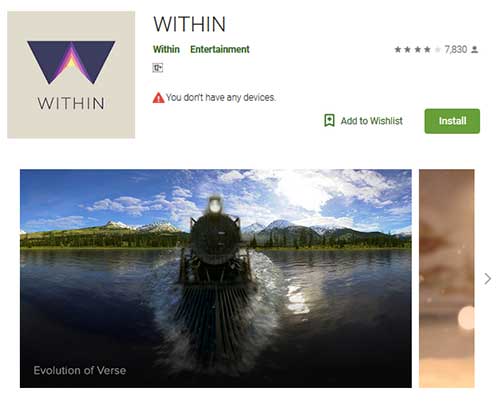 WITHIN offers the best VR contents and also the best VR apps for Android and iOS users. You will get the great VR content from one of the world’s best VR creators and all this in a single app. this app brings you the premium story-based mesmerizing content in multiple categories. This app is best for those who love storytelling because you can experience the future of storytelling. Once you install this app, then you can download personal videos, and also insert the photo into the viewer to watch.

If you are curious about the space and life over there then Star chart VR is the best app for android users because you can travel through the solar system and night sky in VR. This app helps you to embrace the distance between the solar system and the excessive scale of our universe. Star Chart is installed by over 25 million people all over the world. Star chart VR allows you to roam around solar system from sun to smallest moon of Saturn.

For Android (varies with devices)

The price starts from US $ 4.99 (varies with platforms) 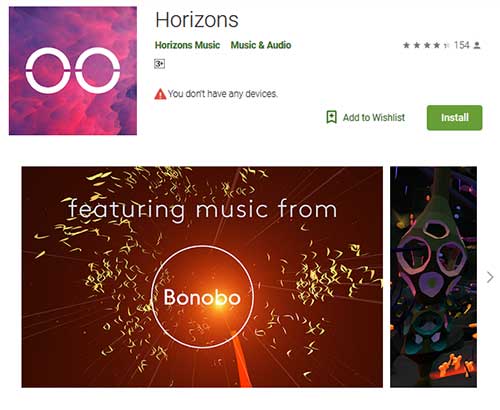 Horizons is the series of an interactive musical journey for the daydream. The music is from popular producer Bonobo. This app allows you to control the music and music will control the virtual reality world. The peoples who are the fan of Bonobo will not think twice to install this VR app. This app gives a beautiful experience one can have and took you to another dimension. Horizons contain breathtaking Visuals. You may have mind-blowing experience in Bonobo scene with jellyfish underwater, but you must have a good quality headphone to enjoy the fullest!

Here in the above mentioned list, we tried our best to give you the top list of best VR apps and VR games that may give the experience of the best virtual reality world.

Have you read all the above listed apps and games? Do you find any other app we forgot to mention in the list? Have you found the above article contents are useful for you? If not, then you should definitely go through the above list and share your experience and suggestions with us. Your comments always inspire us to do work more efficiently.

Stay tuned with us for more information and updates. Till then Enjoy the Virtual reality world!!